The Jews in Florence and Cosimo I de’ Medici 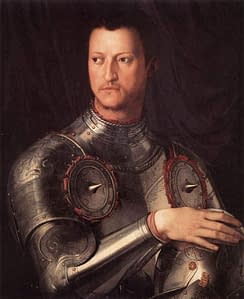 The Jews in Florence and Cosimo I: the ghetto as something completely new

Let’s continue with our story about the Jews in Florence and Cosimo I de’ Medici. What was the reason behind transferring the Jews to a ghetto? Don’t miss the chance of having a more in-depth tale of Florence’s Jewish history by booking our Jewish Florence Walking Tour!

The creation of the Jewish ghetto in Florence played an important role in shaping the new Tuscan State which, in a few years, passed from being a republic to a monarchy. The Jews had been persecuted since the Middle Ages. Furthermore, their residence in a separate part of the city had always been preferable. Nonetheless, this was never put into action by law. But it ultimately happened in the early modern period. The ghetto was something totally new. It showed the interest of a modern State to exercise its power, not only legally and administratively, but also spatially. Inside the ghetto, as well as inside the convent, the hospital and the jail, the State arrogated the right to command upon the urban space. Florence, throughout the centuries, had seen the magnates dominate the city with their towers and palaces, religious processions and jousts. In the second half of the 16th century, however, the Medici State tried to extend its control over the residence of some of its subjects, the Jews.

The Jewish ghetto of Florence can be recounted from a double perspective. The first is political. It regards not only the consolidation of the Medicean State in the difficult passage from republic to monarchy, but also the attempt to protect the unity of Christendom. Christendom was threatened by the spreading Protestant Reformation. The second is a social point of view, which has to do with how the ghettoization influenced the Jewish community of Florence and the relations between Jews and Christians in everyday life.

The Jews in Florence and Cosimo I: the origin of the word “ghetto” 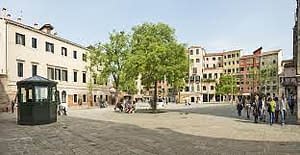 The ghetto of Venice today

In 1570, when the Jewish ghetto of Florence was still a hybrid plan, there were already ghettos in three other Italian cities: Venice, Rome and Ancona. The Republic of Venice instituted its Jewish ghetto in 1516, the first one in the world. The reason if this was merely commercial, with no involvement by the Church. The word ghetto actually derives from the Venetian word “geto“. It indicated the area of the lagoon where the Jewish merchants used to live. In that neighborhood there were several foundries where metal was cast, “geto” in the Venetian dialect. From the geographical connotation, the word “geto” passed to indicate the place of the Jews. Moreover, “geto” sounded very much like the Jewish word “ghet”, meaning divorce. So, the ghetto was, figuratively, a sort of divorce of the Jews from the Christians. Nevertheless, the Church had a central role in the creation of all the other ghettos in Italy. The ghetto of Rome was built in 1555 by Pope Paul IV, together with the ones in Bologna and Ancona, following the bull Cum nimis absurdum. In 1569 Pope Pius V evicted the Jews from the ghetto in Bologna, obliging them to move into the one in Rome. He also invited all Christian kings to clearly divide Jews from Christians with the bull Romanus pontifex. Cosimo de’ Medici was the first one to comply, making the ghettos in Florence (1571) and Siena (1572). Around the mid-17th century, almost the entire Italian Jewish population lived in the ghettos.

The Jews in Florence and Cosimo I: antisemitism and the Medici power

After centuries as a glorious republic, Florence was now controlled by the power of the Medici court. It desperately needed to legitimize itself in the eyes of its citizens. Cosimo used the strategy of exiling his enemies, the disarmament of the commoners, and political arrests. Nonetheless, consent had to be obtained primarily through economic development, especially of silk after the decline of the wool trade. Cosimo built infrastructures, which created employment, such as the construction (or restoration, in some cases) a few years later of Santa Trinita Bridge, Boboli Gardens, Uffizi Gallery and Pitti Palace. He promoted the maintenance of forests and rivers, to avoid floods. He even  empowered the military defense and fortresses along the sea side. In general, he established a modern bureaucratic machine. The Jewish community of Florence in this plan seemed to have no relevance. The Florentine Jews had no connections with France (indeed Cosimo was allied with Spain against France).  They could not accede to any political, military or cultural position. In other words, amongst all Cosimo’s troubles, the Jews were not at the top of the list. In order to centralize power without provoking too much popular resistance, Cosimo had to establish a new governmental elite depending on him. Anyhow, a true effort to make a peaceful, right and prosperous state was also indispensable. As a result, something had to be given back to the people in order not to perceive the State as a cruel tyrant. The answer was the expulsion of the Jews from all Tuscan cities. If they wanted to remain in the Medicean State, they had to live forcibly in the ghettos of Florence or Siena. In 1564 Cosimo I abdicated in favor of his son Francesco.

The Jews in Florence and Francesco I de’ Medici

Unlike his father, he had a melancholic and introverted personality and never

really took care of the government of Tuscany. When the Jews were chased from the State of the Church in 1569, many looked for  shelter in Siena. The governor of Siena sent a prompt and worried letter to Francesco, asking how he should behave with these people. The resentful answer of Francesco was that the Medici did not want to infect their State with that disease.

Born in 1541, Francesco got married in 1565 to Joan of Austria, sister of Maximilian II of Habsburg, emperor of the Holy Roman Empire, and daughter of Ferdinand I, King of  Bohemia and Austria. In almost all of the Austrian cities under the dominion of Joan’s father, the Jews had been expelled long ago and were obliged to wear a badge. Furthermore, a strong antisemitism was deeply rooted in the German world, permeated by false myths and stereotypes, like the profanation of the Christian host and the ritual homicide of Christian children. To complete the picture, Francesco had spent some of his adolescence in Spain, land of his mother, where the Jews had been banned in 1492 and where the Inquisition struggled with the so-called “marranos”, the converted Jews who craved to go back to their old faith. Nevertheless, if we consider the social and political situation of the Medicean State and of anywhere in Europe (widespread poverty, famine, bloody fights against Turks and Protestants), it does not seem plausible that a handful of Jews scattered around Tuscany (approximately 700 people) were so dangerous to cause great concern to Cosimo and Francesco.

The “confusion” of the Jews

The expulsion edicts of 1570 and 1571 alluded to two crimes committed by the Jews: the violation of the banking charts allowed by the Tuscan government and the violations of canon law.

The Jews were considered guilty of generating confusion, since the Christians were not able to distinguish them from the rest of the population, they were so mixed together. Actually, the etymology of the word “confusion” helps us understand the subtle nuance of the meaning: from the Latin con and fusus, literally molten with. For this reason, the Medici government had re-introduced the obligation of the yellow badge. But were the Florentines of the late 16th century seriously unable to understand whether someone was Jewish or not? The greatest difference was obviously the religion. The Jews did not go to church, their day off was on Saturday and not on Sunday, they did not take part of any of the Christian festivities. Moreover, if they had recently arrived from other parts of Italy, they surely had a pronounced accent (from Ferrara, Umbria, Marche, etc.). Their names were  also too unusual to be Christian: Moise, Salomone, Laudadio, Sabatino, Abramo, Jacob e Iosef (sometimes changed into Iacoppo or Giuseppe). Women instead often had biblical names: Rebecca (shortened as Ricca), Miriamma, Rachel, Sara, Giuditta, but even original names, such as Dolce, Gentile, Bruna, Allegra, Chiaretta, Benvegnita, Stella and Diamante.

David and Goliath, Judith and Holofernes

The expulsion edicts did not mention the traditional antisemitic accusations, like the assassination of Christian children, the poisoning of wells or the spreading of plagues, which were so common in the German countries. The Medici sovereigns knew well that these were shameful charges and did not wish to inflame the popular rage against the Jews. On the contrary, they did want to consolidate their image of a fair but severe government  which had inherited the democratic values of the Republic but also differed from a tyranny. The Medici aimed to appear in the public eye as David rather than Goliath, as Judith rather than Holofernes. To ghettoize the Jews meant to ordain the State and preserve Christianity. Like the nuns who lived in the monasteries and the prostitutes who lived in the brothels, the Jews were to live in the ghettos from then on. The religious characters of David and Judith are symbols of the XV- century Florentine Republic. They are mutual alter-egos: like the young and handsome David defeated the giant Goliath, enemy of Israel, thanks to his moral vigor and firm faith in God, the charming widow Judith, in the same way, won against the general of the Assyrian army, Holofernes, using shrewdness and beauty to make the will of the God. Donatello and Verrocchio are the authors of three statues of David slaughtering Goliath, today conserved at Museo Nazionale del Bargello (Florence’s sculpture museum). Donatello is also the sculptor who cast in bronze the masterpiece of Judith beheading Holofernes, today inside Palazzo Vecchio (Florence’s city hall). Michelangelo recovered the republican tradition of David, when he began his famed marble statue in 1502, which replaced Donatello’s Judith. In the interpretation given by Michelangelo, the handsome David represented the Republic of Florence resisting the attack of the giant Goliath, who embodied the boundless power of the Medici, recently exiled from Florence in the name of freedom.

In my Jewish Florence Walking Tour you will see how many Jewish characters are represented in Florentine Renaissance and medieval art and you will learn about the relations between the city and the Jews through the centuries.