Jewish Tour at the Uffizi Gallery: discover the Jewish characters of the Renaissance paintings.

Jewish Tour at the Uffizi Gallery

Thanks to our Jewish Tour at the Uffizi Gallery you will admire one of the most extraordinary art collections in the world. Coupled with this, you will also learn about the stories of the Medici family, the lords of Florence. Moreover, the Medici family was strictly related to the history of the Jews in Florence. The Uffizi Gallery houses a variety of Renaissance paintings with Jewish characters as protagonists. This museum is not to be missed! Alongside Christian characters and mythological stories, the museum houses a number of masterpieces by undisputed famous artists.

Particularly, genius artists like Caravaggio, Rembrandt, and Artemisia Gentileschi depicted episodes of the Jewish Bible. Booking our Jewish Tour at Uffizi Gallery you will discover the connections between the Renaissance and the Jewish cosmos. In our opinion, some of the most awe-inspiring artworks with Jewish subjects at the Uffizi Gallery are “Portrait of an Old Rabbi” by Rembrandt, “Binding of Isaac” by Caravaggio, and “Moses Defends Jethro’s Daughters” by Rosso Fiorentino.

Jewish Tour at the Uffizi Gallery. Rembrandt and his melancholic portrait of the Rabbi of Amsterdam

“Portrait of an Old Rabbi” is a masterpiece by Rembrandt Harmenszoon van Rijn, simply known as Rembrandt (1606-69). He made this in 1665, toward the end of his vivid artistic career, when he devoted himself largely to portraits. Around the 1630’s he lived in the Jewish district of Amsterdam. Here he often used neighbors and friends as models for his paintings.Although there is no official documentation, his old man is likely rabbi Haham Saul Levy Morteira. In this portrait Rembrandt investigates the psychological state of the old man. Equally important, he underlines his detached melancholic expression. He seems lost in his thoughts.

Likewise, he’s being absorbed by the dark background of the canvas. Undoubtedly, Napoleon’s officers certainly recognizedthe high quality of this piece. Actually, between 1799 and 1815 they moved it to the Louvre Museum in Paris. Fortunately, it came back to Florence in 1834 and it was put on display at the Palatine Gallery, inside Pitti Palace. Today we can see it on the first floor of Uffizi Gallery. 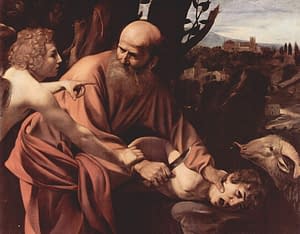 Michelangelo Merisi(1571-1610) is universally known as Caravaggio, from his birthplace near Milan. Caravaggio painted one of the masterpieces of the museum, the “Binding of Isaac”, in 1602. It is a story from the Jewish Bible found in Genesis 22. God made Abraham undergo an extraordinary trial of obedience, by ordering him to sacrifice his only child, Isaac. Caravaggio faithfully depicts the crucial moment of this drama. In fact, an angel sent by the Lord stops Abraham, right when he is about to immolate the boy. “And he said, Lay not thine hand upon the lad, neither do thou any thing unto him: for now I know that thou fearest God, seeing thou hast not withheld thy son, thine only son from me” (Genesis 22:12). Then the angel shows Abraham with his left hand a ram to offer instead of Isaac. The artist chooses to humanize the angel by putting him beside Abraham as a solid presence grabbing the old man’s wrist with a firm grip. Ultimately, in the background there’s a hilly landscape animated by countryside narrow streets and a village.

The biblical subject was surely suggested by the illustrious buyer of this work, Monsignor Maffeo Barberini. He was a prominent clergyman of the Holy See and future pope Urban VIII. Furthermore, Caravaggio’s authorship of this work is proven by several payments made by Barberini to the painter.

Lastly,Charles Fairfax Murray(1849 –1919) donated this masterpiece to the Uffizi Gallery in 1917. Murray had bought it as a work by Gerrit van Honthorst, a Dutch painter active in Florence in the XVII century. His name was translated in Italian as Gherardo delle Notti (Gerard of the Nights), for his dark atmospheres illuminated by candles. Charles Fairfax Murray was a British painter, dealer, collector, benefactor and art historian. In 1872, he left England for Italy. He worked as a copyist for John Ruskin in Rome, Siena, Pisa and Venice. This allowed him to advance his study of the Italian masters. Then he married the 16-year-old Angelica Collivichi and they settled in Florence. Here he acted as an art dealer and art historian, connected with the most important European museums.

Rosso Fiorentino and the power of Moses defending Jethro’s daughters

Giovanni Battista di Jacopo(1495-1540) was named Rosso Fiorentino for the color of his hair. He studied at Andrea del Sarto’s workshop together with his companion Pontormo. From the very early works, he had an original style, characterized by an anti-classical attitude. In other words, he aimed to go beyond the Renaissance’s balance and create a strong dramatic tension. In 1524 he moved to Rome, where his style became elegant and sophisticated. After the sack of Rome in 1527, he meandered between several Italian cities in search of patronage. Finally, he was hired by the King of France to decorate the royal palace of Fontainebleau. His artworks there are a cornerstone for the international manneristic style.

“Moses Defends Jethro’s Daughters” was made by Rosso around 1523-1524. This oil on canvas depicts Moses defending the seven daughters of Jethro, his father-in-law. It was then sent to king Francis I of France around 1530. Between 1568 and 1588 the work came back to Florence to enter the collection of don Antonio de’ Medici, son of Gran Duke Francesco and Bianca Cappello.

After having killed an Egyptian man who mistreated an Israeli man, Moses escapes to the desert. While he is resting nearby a well in Median, he sees the seven daughters of Jethro. They are drawing the water for the father’s flock. Suddenly, some aggressive shepherds try to chase the girls from the well. So, Moses drives away the rivals. Lastly, he takes the water from the well to help the maids.

In the foreground, Moses is depicted as a half-naked Hercules. Suddenly, he faces the shepherds, who, afterwords, lay down defeated. The victorious hero appears again in the middle ground while he runs toward Sephora. She is his future wife and is still frightened. The biblical story is completed with the well in the background and the other six sisters. Rosso Fiorentino interprets the holy episode as a fight of nudes. The vigorous bodies resemble the muddle of soldiers drawn by Michelangelo in his never finished “Battle of Cascina” (lost).

The brutality of the scene is counterposed by the sensuality of Sephora. She is elegantly dressed in a light veil that leaves her breast uncovered. The French sovereign, a refined intellectual, surely appreciated this painting. Actually, Rosso re-proposed the expressive force and the theatrical gestures of these characters in the gallery of the king’s palace in Fontainebleau.

In conclusions, these are just some of the stories you will learn about with our Jewish Tour at Uffizi Gallery. We hope that you want to find out more! In addition to this, you can also take a look at our Jewish Florence Walking Tour.