The Jewish Ghetto of Florence

The Jewish Ghetto of Florence: a less-known chapter in Florentine history

Nowadays, the community attends the beautiful XIX century synagogue of via Farini, in a residential area of Florence (piazza D’Azeglio), completely uprooted from the original historical context. This might be the first reason for the scarce historiographical interest in the Jewish ghetto of Florence. «The ancient city center, from centuries-old squalor, to new life restored». This pretentious inscription dominates the triumphal arch in Piazza della Repubblica (Republic Square), which today is where the Mercato Vecchio (Old Market) and the jewish ghetto once were. After Florence became the capital of Italy (1865-71), the government started a massive, revolutionizing city plan. In particular, the works regarding the Mercato Vecchio took place between 1885 and 1895. This period was celebrated as “Risanamento” (renovation), whereas the ones opposed to this major destruction called it “Sventramento” (literally, disembowelment). It caused the demolition of so many buildings with a high historical and artistic profile: medieval tower-houses, churches, guilds’ headquarters, noble palaces and artisans’ workshops. This operation was presented by the authorities as indispensable to renew a dangerous district, due to very poor sanitary conditions, but in reality it was a mere real estate speculation. The most important “victim” of this urban project was the Jewish ghetto of Florence, which was demolished down to the last stone.

Why is the Jewish Ghetto of Florence not so famous? 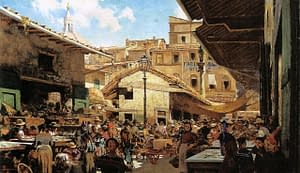 As we have said, there is nothing left today of the Jewish ghetto of Florence. There are only few stone pieces conserved at the Museo Nazionale di San Marco, like the fragment of an architrave with the inscription in Hebrew: “Mattir Assurim”. It was a confraternity near the ghetto (in via delle Oche) which was in charge of finding money to rescue the Jews in jail. Umberto Cassuto, rabbi, historian and Hebraist born in Florence, in his well-known book about the Jews in Florence at the time of the Renaissance (“Gli Ebrei a Firenze nell’età del Rinascimento”), briefly describes the ghetto as a miserable and dark place, completely in contradiction with the tolerant and illuminated Renaissance age. This might be another important motivation: the segregation of the Jews inside the ghetto casts a shadow, or even recants, the spirit of tolerance and liberty of Renaissance Florence and of its main patrons, the Medici family.

The Jews at the time of ghettoization were a minority in terms of population in Tuscany: 712 people according to the 1570 census. They were not very relevant commercially, socially or intellectually. In my opinion, this might have been one more cause of the little attention that the Jewish ghetto of Florence got. Lastly, a fundamental role was played by a sort of dark legend created towards the end of the XIX century by journalists and politicians; they stated that the ghetto was an unhealthy place, both hygienically and morally. This bad name might have had a big influence on the its damnatio memoriae. Without considering an essential fact: at the time of ghetto’s destruction, Jews had not been forced to live there for a long time. After the emancipation, almost the whole Jewish community moved to new areas of the city, far away from the center, primarily to the district around the new Jewish temple in via Farini.

The destruction of the Florentine Jewish Ghetto 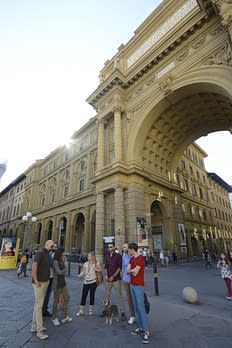 Republic Square, arch of triumph. The Jewish ghetto of Florence was here once.

The abandonment of the ghetto by the Jewish families caused the total decadency of the neighborhood. The heart of the ghetto became a built up area filled with poverty. All the biggest rooms, basements, and attics had been subdivided excessively. The ghetto became a hideout for thieves, full of lurid hostels where, paying a pittance, one could share a bed with 5 or 6 others. This is the description made by Florentine historian Guido Carocci, who vividly recounted the ghetto of Florence right before its destruction in one of his famous books. He agreed with the fact that the ghetto, during the time the Jews lived in it, didn’t have anything “horrible”, but was a rather respectable neighborhood. The press’s exaggerated description of the ghetto’s decay led to its destruction, according to Carocci, in favor of a new residential area perfect for the bourgeoisie.

In a few years Florence passed from being a small town to becoming the capital of Italy, and this was inevitably reflected in its architecture. Large avenues recalled the French boulevards, a modern market of cast iron and glass, wider streets to facilitate traffic, medieval walls torn down to expand the city, and a marvelous tree-lined road led uphill to Michelangelo Square, the brand-new amusement venue for the middle class’s Sunday walks. Once the capitol was gone (it was moved to Rome in 1871), the modernization works begun by architect Giuseppe Poggi had to continue. The ghetto was razed to the ground in 1888, sharing the same fate as the Mercato Vecchio. It was, however, a real estate speculation with the aim of gentrifying a very central area that could be much more profitable if rented or sold to the upper class, while the poor people were obliged to move to the outskirts, in the area around the church of San Lorenzo, where the new Central Market was erected. Piazza Vittorio Emanuele (in honor of the new king of Italy), today Piazza della Repubblica, became the parlor of Florence, with its trendy cafes, luxury hotels, cinemas, and shopping galleries.

The Jewish Ghetto of Florence: a fundamental hint in the history of Tuscany

Telemaco Signorini, The ghetto of Florence, 1882.

In spite of this oblivion, the Jewish ghetto of Florence is a fundamental hint in the history of Tuscany and of Italian Jewry. In July 1570, the governors of 22 Tuscan towns received the order by the Magistrato Supremo (the highest decisional organ under the Medici State) of counting all Jews living under its jurisdiction. It was not a regular census to collect taxes, but rather a true count to relocate the Jews to a new area. The Jews of Tuscany were 712, excluding Siena, who were treated as an independent State (and actually Siena would establish its own ghetto right after Florence). The expulsion edict was promulgated on September 26 1560. In Spain the Jews were expelled in 1492, in Navarra in 1498, in the Kingdom of Naples in 1541 (even a first edict was made in 1510). In Portugal, instead, the Jews had been forcibly obliged to convert to Christianity since 1497 (the Portuguese king wisely realized that evicting the Jews meant losing a huge amount of money owned by the most affluent Jewish families in his kingdom). At any rate, Cosimo I de’ Medici, Gran Duke of Tuscany, didn’t decide to banish the Jews but to put them in new geographic areas within his State. On July 31 1570 a second edict decreed the creation of the Jewish ghetto of Florence, in a neighborhood between the Baptistery and Mercato Vecchio, in the very heart of the city.

The Jewish Ghetto of Florence and the Counter-Reformation

The ghettoizzation of the Jews was strictly related to Counter-Reformation. The simple tolerance of the Jewish infidels was no longer acceptable, a new strategy of containment was now necessary. Unlike the protestants, considered heretics by the Inquisition, the Jews were born Jewish, and it was not their choice. For this reason, it was not allowed to treat them as they were heretical, they could not be persecuted nor could they be forbidden to read their holy texts. Hence, the need of limiting their freedom by enclosing them in a forced residence. Even if supported by religious justifications, the ghettoization of the Jews in Tuscany was a deliberated act by the State to consolidate the new totalitarian government of Cosimo I. In 1550, Florence, with a population of more than 60,000 souls, was one of the biggest cities in Europe. Its sovereign, Duke Cosimo, was an energetic, ambitious and forward-looking man. Thanks to careful collaboration with the upper class, he had been able to transform the unstable duchy entrusted to him when he was just 17, into a powerful, modern and solid state. In the counter-reformed Italian states there was a sudden urgency of redefining Christendom: fighting the heresy, creating a clearer doctrine, and determining visible borders between Catholics and Jews were the instruments to employ.

Eager to know more about all this? You will do that with our Jewish Florence Walking Tour!