Bernardo Buontalenti (Florence, 1531-Florence 1608) was a Florentine stage designer, architect, theatrical designer, military engineer and artist. He was much employed in the design of fortifications, villas, and gardens and is considered one of the most important architects of the Mannerist period (the Medici Villa in Pratolino, the Tribune in the Uffizzi Gallery, the palace of Bianca cappello in Via Maggio, the Forte Belvedere, the Buontalenti Cave in the Boboli Garden, the project for the new city of Livorno, etc.) . He was also a great mechanic, and an excellent mathematician. Besides tha, he is also traditionally considered the inventor of modern gelato. The Grand Duke Cosimo I de’Medici wanted him to organize an opulent banquet to celebrate the Spanish deputation, that had to stand open-mouthed in front of so much splendour. Buontalenti invented a new dessert for the occasion: a sorbet 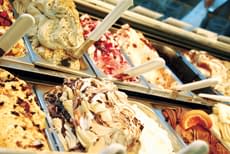 made with ice, salt (to lower the temperature), lemon, sugar, egg, honey, milk and a drop of wine. His cold cream was flavoured with bergamot and orange and was the forerunner of the modern Florentine cream. Buontalenti was an expert of the ice conservation; he has indeed projected some cold storage room both in the Boboli Garden and in the Cascine area. Near the Medici Fortress there is a street called Via delle Ghiacciaie (i.g. “icehouse street”), that owes its name to the cellars covered with isolating cork and wood panels, with a system of canes that let the thawed ice flow down. Buontalenti probably even built a sort of manual whisk to whip up the cream.

The name of the gelato inventor has been given to a gelato flavour: the Buonatelenti, at base of egg cream and whipped cream. If you want to taste the real Buontalenti you have to try the one made by Gelateria Badiani (Viale dei Mille, Florence), they have registered the trademark!

To taste all the gelatos flavour, don’t miss the Gelato Festival in Florence this week-end, from 25 to 29 May! Gelato makers from all over Italy will be located in Piazza Pitti; the Sammontana Village (the most important brand of industrial gelato in Italy) will be in Piazza della Repubblica and the ice cram shops participating in the festival circuit scattered all over town will be the beating heart of the festival!